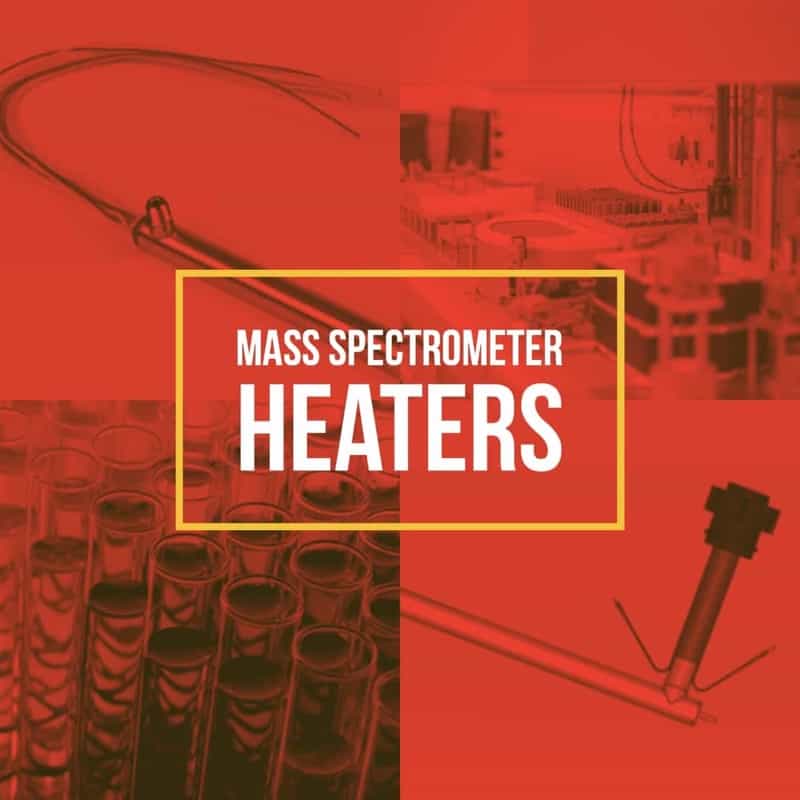 Mass spectrometry is a technique of analyzing and identifying chemical substances by arranging gaseous ions in electromagnetic fields based upon their mass-to-charge ratios.

Mass spectrometer heating elements, also referred to as source heaters or gas line heaters, are used in mass spectrometers to turn the sample (typically in an aqueous or organic solution) into a vapor for analysis. The heaters are part of the sample conditioning system, prior to the analyzer and detector areas, where the vaporized sample is then bombarded by ionized high-energy electrons and analyzed.

Heaters used in mass spectrometers are compact in design and provide a fairly high power density. They are fast responding and operate at temperatures up to 400 deg. C. They include internal temperature sensors for accurate control and limiting.

The Capillary Source or APCI (Atmospheric pressure chemical ionization) heater has a Resistance Temperature Detector (RTD) built into it (other sensors are optional). The heater assembly has a .016” ID capillary tube in the center of the heater axis.  The maximum operating temperature is up to 400°C and comes with a fixed connector plug or modified to your standard

The MCF heater can be used to heat media in-line with the process flow. This heater is cleaned with IPA and rinsed with DI water and then passivated. This process minimizes contamination of the media being heated. For liquids, the max outlet temperature is driven by the liquid media, for gases the max outlet can be 800°C. The internal element in most cases comes with a built-in thermocouple (K or J), which will monitor the heater and the media temperature. BCE prefers grounded junctions, meaning grounded to the sheath of the internal heater. By having this configuration, the heating element is in direct contact with the media, hence maximum efficiency.

This heater assembly is used in the electron ionization to ionize and fragment analyte molecules before mass spectrometric analysis and detection. A typical electron ionization source exposes the analyte, under vacuum to a stream of thermionic electrons produced from a resistively heated-gas weldment assembly.  Gas heated up to 450°C.  Built-in thermocouple for precise temperature control is incorporated in the gas body assembly.

A powerful, compact solution for heating moving liquids and gases.

For electron ionization in the gas chromatography and mass spectrometry industry.

Signup for our Newsletter

CLICK HERE to send your requirement for a vacuum feedthrough, thermal system design, or ceramic processing and a BCE representative will contact you immediately!

Belilove Company-Engineers is pleased to announce that their Hayward, CA facility has received their official ITAR registration from the US Department of State.

BCE is very pleased to announce the company has been awarded ISO 9001: 2015 approval. Read more or download certificate.